The Founder's Dilemmas by Noam Wasserman 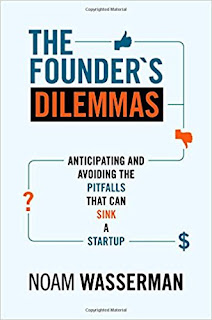 This book is a detailed report from a study of 212 startup founders/founding teams, including Steve Wozniak (Apple), Evan Williams (Blogger, Twitter), and Tim Westergren (Pandora Media).

Noam Wasserman (author) explains the key decisions that founders and/or co-founders need to make from the day on which they decide to build their company until it is acquired by a larger corporation or goes public.

The book also gives advice on dealing with investors and boards, based on the entrepreneur´s motivations, which are typically wealth or power.

Takeaways and Paths of Action:

The following only apply to individuals that are or would like to become entrepreneurs:

1. Keep co-founder relationships in order:
Handshake contracts for equity distribution lower the value of a startup and generate confusion among the members of the team later on. A written agreement benefits everyone.

Make sure to plan for worst-case and unexpected scenarios such as bankruptcy, disease, or a co-founder exit to take care of their children (e.g., use vesting and cliffs.)

2. Try before you buy:
The most successful founding teams in the study were those whose members had previous working experiences. Being classmates in college does not count.

When looking for co-founders, give preference to people with whom you already have a healthy professional relationship, or have a test period before making a final decision on equity split.

If you´re the CEO to be replaced, your best alternative (statistically and logically) is to recognize that your company requires a new leader with a different skill set to yours, and to help the board find that new leader.

Sometimes, founding CEOs can maintain control by becoming chairman of the board.

Wealth and power are the two most common motivators for becoming an entrepreneur. However, very few can reach both goals (e.g., Bill Gates). More often, founders will need to choose between ¨a large piece of a small pie or a smaller piece of a larger pie¨.

Entrepreneurs that are consistent with their (true) priorities on every stage are more likely to succeed. Pick one of the columns below: 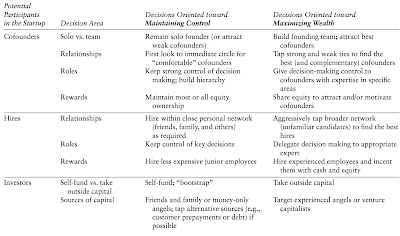 September 17, 2018
The book: This book is a very practical guide to transforming ideas into messages that your audience will care about, understand, and remember. The authors, Chip and Dan, are professors at Stanford and Duke University, respectively, and work with students and entrepreneurs applying their research every day. (They know what they are talking about.) Every one of the 6 principles of sticky ideas is explained through several examples. At the end of each chapter, there is an "idea clinic" where the authors show a real message and improve it using one of the six principles. Takeaways and Paths of Action: At Stanford University, 10 students were asked to present to their classmates about the importance of hat non-violent crime in the U.S. The speeches were evaluated by their peers and ranked from "best" to "poorest". As one may expect, the students with more public speaking experience, who were more eloquent, delivered the "best" speeches.
Post a Comment
Read more