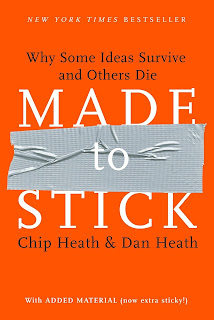 This book is a very practical guide to transforming ideas into messages that your audience will care about, understand, and remember.

The authors, Chip and Dan, are professors at Stanford and Duke University, respectively, and work with students and entrepreneurs applying their research every day. (They know what they are talking about.)

Every one of the 6 principles of sticky ideas is explained through several examples. At the end of each chapter, there is an "idea clinic" where the authors show a real message and improve it using one of the six principles.

Takeaways and Paths of Action:

At Stanford University, 10 students were asked to present to their classmates about the importance of hat non-violent crime in the U.S. The speeches were evaluated by their peers and ranked from "best" to "poorest". As one may expect, the students with more public speaking experience, who were more eloquent, delivered the "best" speeches.

The lecture continued. Then, unexpectedly after 10 minutes, the professor asked them to pull out a piece of paper and write all they could remember from every presentation. Few could remember more than two points, and they remember as many ideas from the presenters at the top of the ranking as from those at the bottom. Sometimes they did not remember anything at all.

Why do you remember "I have a dream" but do not remember "Flagella are long, threadlike cell structures used in locomotion"?

There are six features that all sticky ideas share; they are simple, unexpected, concrete, credible, emotional, and they tell stories. (S.U.C.C.E.S., in case you did not notice). So, to create a sticky idea,  first, find your core message and, second, apply these six principles:

In 2007, Southwest Airlines found through customer surveys that their clients would prefer a salad in their flight from Los Angeles to Portland. The regional manager did not know whether they should incur in this additional expense, so he asked the CEO, Kelleher, back then. Kelleher thought for a second, and then asked to the manager: "John (made up name), would offering salads instead of peanuts make Southwest THE low-fare airline?"

This was Southwest's core mission, to be THE low-fare airline, and everyone got it. The airline kept serving peanuts but also offered the cheapest flight available.

Compare this to other companies' mission statements: "Maintaining a global viewpoint, we are dedicated to supplying products of the highest quality, yet at a reasonable price for worldwide customer satisfaction" (Honda) or "Maximizing shareholders equity" (most investment firms).

To be remembered and acted upon, ideas must be simple and clear.

A simple way to make ideas simpler is to use analogies drawn from everyday occurrences. Talk about soccer when explaining about teamwork and company culture, or about computers to explain how our brain works (this is something scientists actually use for themselves).

To be unexpected, you need to push your message to "uncommon sense". For example, a flight attendant (not from Southwest) once wrote a poem to explain the typical emergency procedures. Everybody listened in surprise.

To qualify as unexpected, a message has to break people's "guessing machine" (view of the world). The typical process is: (1) ask a question, (2) let them guess, (3) provide a completely different answer.

It is useful to think about "what questions do I want my audience to ask" instead of "what messages do I need to convey".

John F. Kennedy once set the goal of advancing aerospace and computer science to the point of becoming the most technologically advanced country and challenged NASA to be the leading world organization in rocket technologies. He said this and many other things during his 1961 speech, and he condensed everything into one sentence: "I believe we should go to the moon". Simple? Yes! Concrete? Absolutely!

To be concrete, ideas must be seen or felt; they must be tangible. "Going to the moon" did not tell anybody what to do, but everybody knew what to aim for; their efforts were focused on accomplishing a single goal.

Here is how to make your ideas a little more concrete:

Give them a name. Don't talk about the "2018 training process for incoming sales representatives", refer to it as the "Welcoming training" or "The ABC", whatever works for your team or organization.

The third; when you are telling a story, do not refer to a man in Africa, refer to Hatim, a working engineer in Nigeria with four kids and passion for swimming. Talk about real (or made up, but concrete) persons. Avoid abstractions.

If your sibling who just started her Physics degree says she has discovered a new law of nature, you may think that's absurd. But, if Stephen Hawking had said so, you may consider it possible. The technology for the iPod had been introduced years before Apple knew about it, but only when they announced it, people started buying into the idea of "a thousand song in your pocket".We trust people with authority.

However, you may not know any authority in your field to back up your idea. Fortunately, "anti-authorities" are sometimes easier to find. For example, anti-cigarette campaigns often get addicts to talk about the health an life issues of smoking, and they are often more effective than scientists in persuading people to quit. In another example, you could ask somebody who got severely injured in a work accident to talk about workplace safety.

There are good ways and bad ways to show data, here is a bad way:

Here is a good way:

Notice how one tells how the second message gives you a clear idea of what the statistic means for you.

The first four principles will make people believe in your idea, but believing is not enough. People need to care.

What do people care about? Well, the famous psychologist Abraham Maslow found that there are six basic human needs: self-improvement, self-esteem, love/belonging, safety, and physiological needs such as eating and sleeping.

To evoke emotions, you must appeal to one or several of these needs, and make it evidently. For example, consider changing your title from "The benefits of exercising" to "How to lose 15 pounds of fat in 7 days" (self-improvement, physiological) or your market label "The ultimate alarm clock" to "Wake up on time, no matter what" (belonging, self-improvement)

Your title should tell that there's something of benefit to the audience in your idea, and your idea should clearly tell how they can benefit from it.

To evoke emotions, you must also refer to real people. You do not care about one out of ten children in Syria dying, do you? But you would care for Jimmy, the Syrian kid who just lost his family and needs your help. Concreteness is necessary to evoke emotion.

Stories are the simplest way of combining all the five principles. Consider company 1:
"Customer satisfaction is our main priority"

What does this phrase tell you about the company? If you were working for this company, how would you use this sentence to handle customer complaints? Now, consider a story from Nordstrom:

"Last year, on new year's eve, a minute after the store closed, one of our representatives courteously helped a customer wrap a gift she had bought from Macy's"

The second message is not an instruction, but it certainly gives you a good idea of what "good customer service" means for Nordstrom.

But, how do you create a good story?

First of all, you are better of by finding one instead of creating it. The world is full of amazing stories, you just need to practice finding them.

Chip and Dan have found that there are only three types of story plots. I will talk about two, the challenge plot, and the connection plot

The challenge plot is about facing difficulties, working hard, and ending victorious. This is the typical plot for hero movies. Think about Hercules.

The connection plot is about creating relationships that bridge a social, economic, racial, or religious gap. Think about Romeo and Juliette or Titanic. 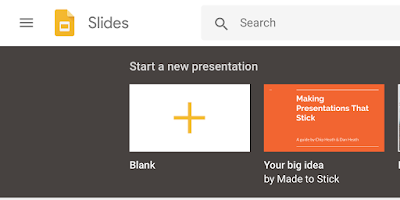 I just found that Google has included slide templates with information on "how to make your presentation stick." You should be able to find them at slides.google.com, right next to "Start a new presentation", with the title "Your big idea by Made to Stick"